Apologies. It's been a busy week in the office, and this project had to go on the back burner. The other reason is that the physical build of this one-off for Peter is now complete. I'm just waiting for him to call in (all the way from Australia) to collect it next Sunday (27 October 2013) so, in my head, the pressure is off.

However, my other awesome friend, Bob 1B King, has started down his own path to valve amp addiction. Bob's amp is already going to be a little different.

One of the mods Bob's looking at is purely cosmetic (but fun) and he's adding an EM80 "magic eye" power indicator. I have these on my WTF Evo X and the T'Watt VIP, so here's the circuit. 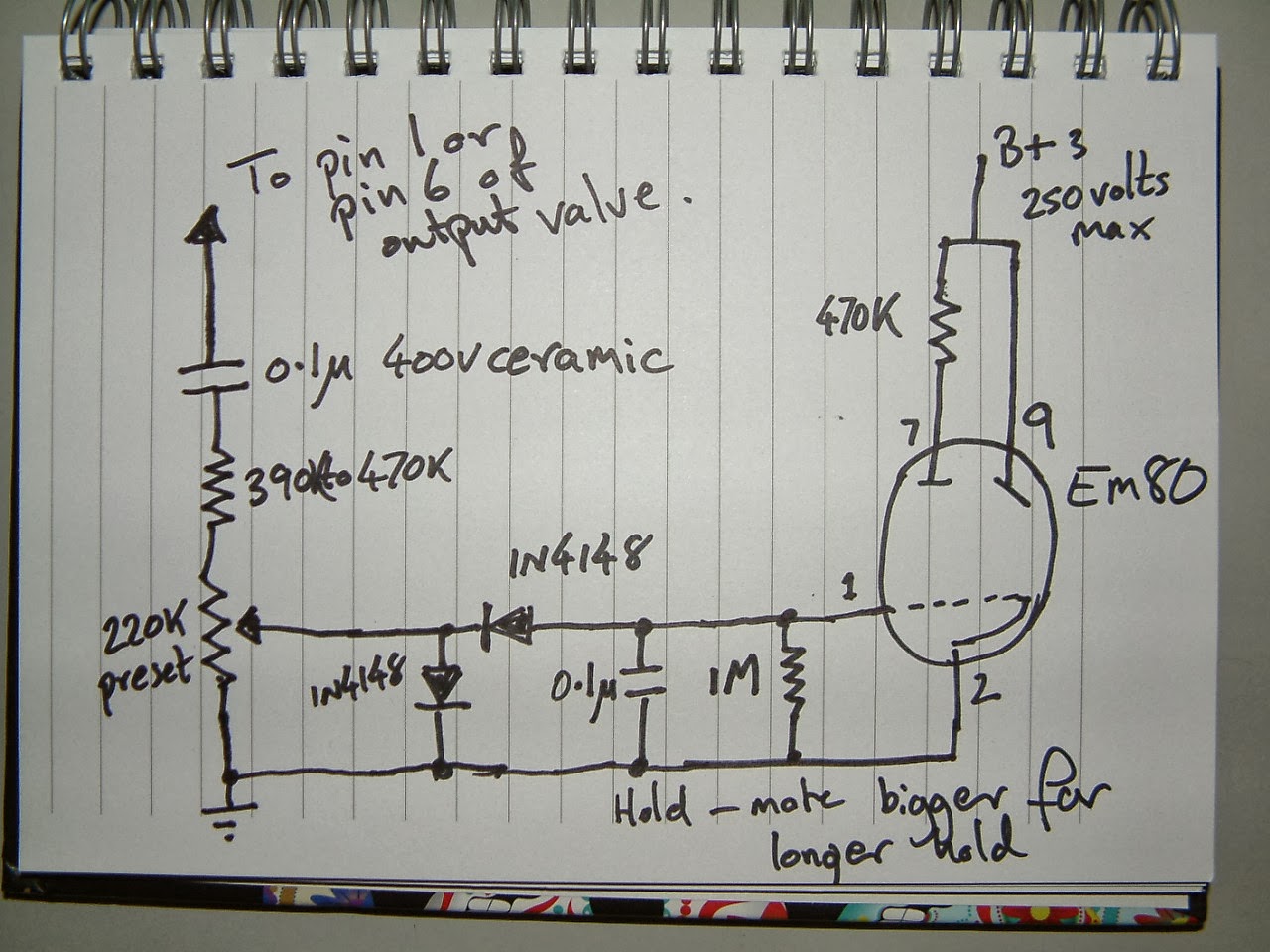 The EM80 is fed from one of the later B+ nodes to get the voltage down below 250 vdc. On Evo and T'Watt, I added an extra node just to isolate the EM80 from the pre-amp circuit a little more. Not needed, but I had the components and the physical space. The supply is fed direct to pin 9 and through a 470K resistor to pin 7.

Pin 1 is the signal feed. The signal is "read" from one of the anodes of the output valve (either pin 1 or pin 6 of the 6N1P). The 0.1uF 400 volt cap blocks the DC from the output valve's anode. The 390K to 470K resistor and the 220K preset are used to adjust the deflection of the magic eye beam. I found that a 470K fixed resistor was just fine in my own amps, but you may want to tweak the values if you're getting too much or too little deflection for the preset to cope with. The pair of diodes just rectify the signal to get a DC level for the EM80 to work with. The 0.1uF cap marked "Hold" in the diagram determines the rise and hold time of the display. A bigger value gives a slower reaction speed. Feel free to tweak.

BE CAREFUL! There is a temptation to tweak the deflection preset with the amp powered up and under load. Remember the warnings about LETHAL voltages and currents. DON'T do this unless you are ABSOLUTELY sure about what you are doing! It's far better to be patient and take your time to power off the amp, tweak, power on and test than to electrocute yourself. I cannot be held responsible for you poking your finger/screwdriver/butter knife into a live DC circuit!

It's fun and gives a wonderful moving light display, but I wouldn't say you could calibrate it to any degree of accuracy for recording and what not.

The whole circuit can be built directly on to the EM80 valve base. It's fiddly, but it can be done. Just keep an eye on the orientation of the two 1N4148 diodes (that's where I usually mess it up first time round). 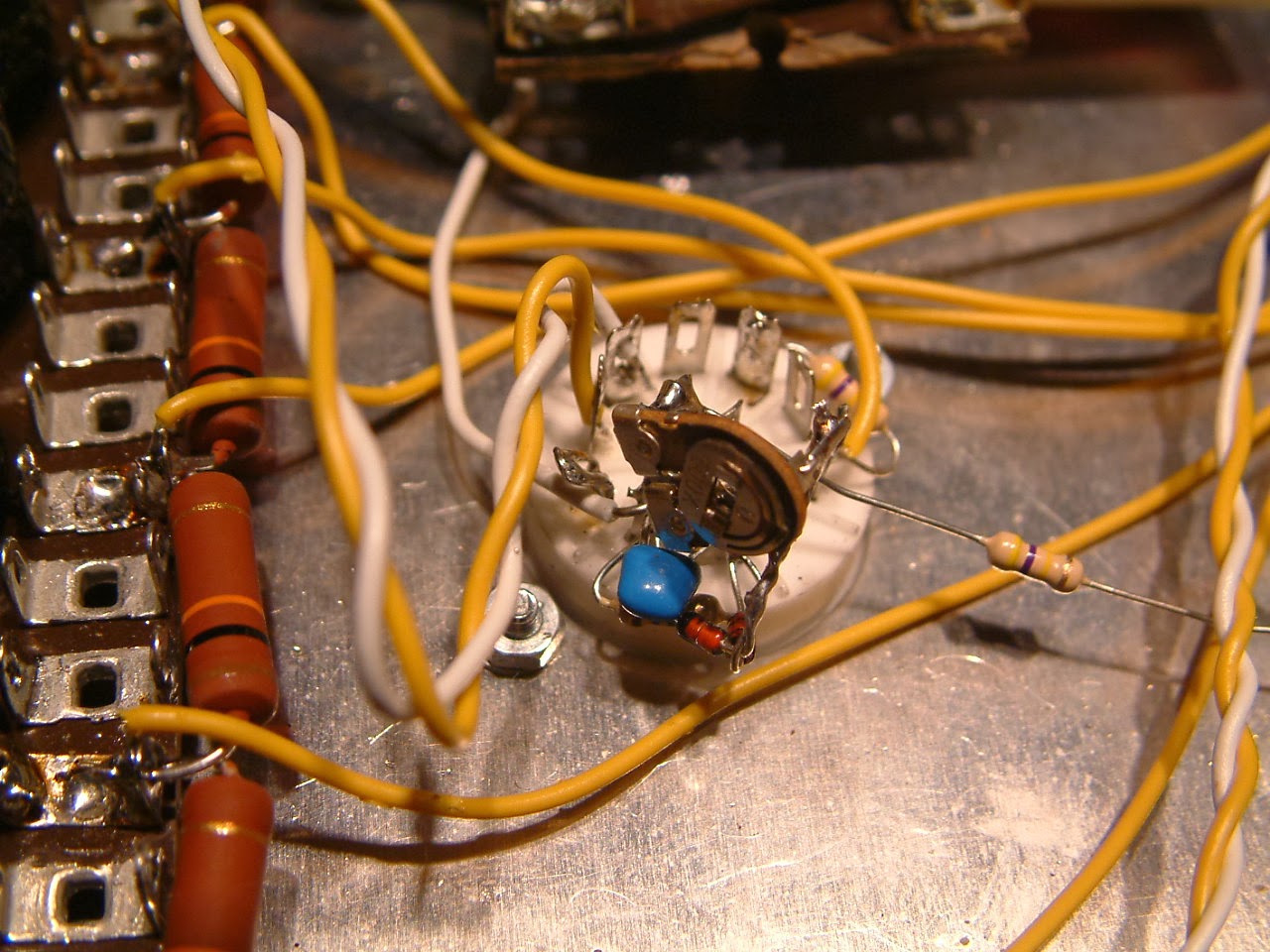 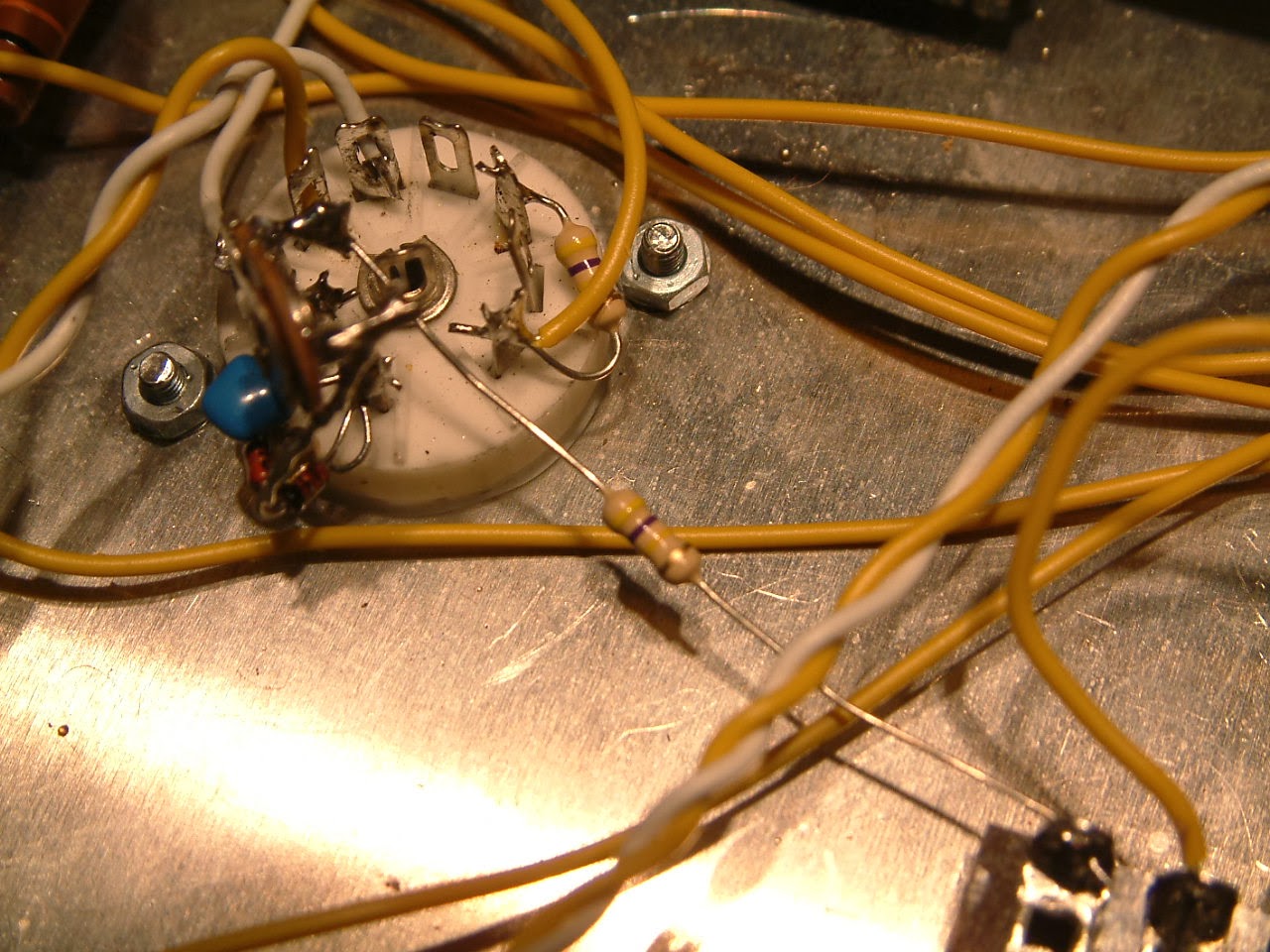 To come - the dreaded tone stack - and the need to add another valve!
Posted by Dragondreams at 03:04